RIZ AND DANNY ENJOYING MY GAME

I had my friends test out my board game and they are quite entertained by it. at first I told them the rules how to play and how to play it. I had to explain it as they go along aswell. at first, they couldnt get the controls of flicking the pen right, it goes every where, but they longer they play, the better they become. an issue about my board game is that, the pen digs in the paper and made it hard to flick. a way of solving this problem is having my board game laminated and use dry wipe pen instead, so it is easier to manuver around the board and easily rub off the marks so it can be playable again on the same board. another issue is pen mark going over other marks creating a dent which make the next shot tend to track the last shot. and using erasable pen still bleeds through the paper, ball point pen works best. 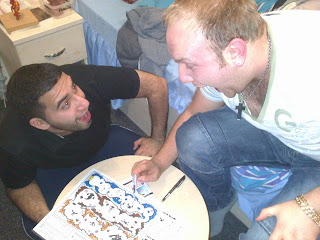 This is the result of a 2 hour gameplay with my friends :D 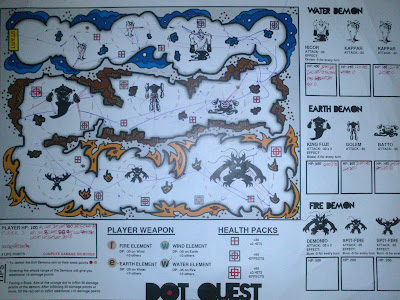 Here's a bit of review they gave back to me :


Danny: "Initially the rules complex. they were easy to grasp once you got playing. Quite entertaining.
Lower the amount of times you have to hit each enemy."
Posted by Brian Lobeda at 21:18