I have chosen to work on the Kino 10 Brief, I believe i have worked really hard on completing this animation. At first everyone have very same ideas of using cameras doing it 3D, I thought to my self that it would be time consuming for me to use 3D, and instead focus on 2D so I could get on with my other animations ASAP. After animating Kino, I looked for sound clips and edited  it and made my own drum beat by cutting clips and putting it together on a loop. I am quite impressed of myself that I was able to make a beat. I used free sound effects for the rest.


I have shown the development/evolution of the cameras by quickly transforming the character as the screen distorts, this style is like a mix of battlefield 3 and transformers where the screen distorts. I have kept the background quite simple like looking into a tv with noise in the background. the ball is meant to be the "O" in Kino which the camera is running after and filming it.

I found the grid effect quite very useful, I never knew I can make 1 very easily instead of going to photoshop and drawing it manually.

This is my first test render of my character run cycle


Character design:
We was told to design characters in illustrator separating each limbs in different layers so it would be easier to animate. after trying out a run cycle. I imidiately  thought of having this in my final piece and improved on it. 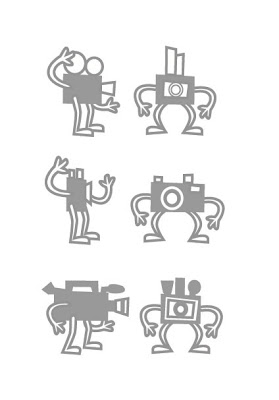 This is my first animation of Kino10, the battlefield 3 effect has inspired me to imitate it and make it my own because it suited for the kino project. I have made this animation by editing the word kino in photoshop and distorting it manually by cutting it and adding filter effects like noise and wind effect to make it look like its moving from left to right. after doing it frame by frame, I import it to after effects and added in an effect called artifact which makes it look even more distorted more noise and movement to it. To complete this animation, I added in a footage of a street in Birmingham which represents where Kino originated from.

Email ThisBlogThis!Share to TwitterShare to FacebookShare to Pinterest
Labels: Business of Animation Module