The Tudors is a European Welsh Origin began from 1485 till 1603,  they were a farming society and lived in small villages. They ruled over England and became a more peaceful and richer place. As the towns grew larger and the mining coal, tin and lead became popular.

*Facts
Toilets were called "Privies" (not private at all) They use leaves or moss to wipe their bottoms. Wealthier people use lambs wool.

Food is a show of wealth. Riches afford all kinds of meat and fishes. People during those time period eat robins, badgers, otters, tortoises and seagulls.

The poor struggles to survive and only eat grey bread made from rye and barley, and vegetable soup. Meat is a luxury but most people keep animals for milk, cheese and eggs. Life during those days were harsh for poor people, they resort to stealing food when harvest failed. When committed a crime, the risk public flogging and hanged.

Women's occupations was to work on spinning cloth, tailors, miliners, dyers, shoemakers, embroiderers and wash women. Some worked in food preparation, brewers, servant, midwives and apothecaries. It is not safe to drink water during those times, so women brew their beer, they even bake their family bread and do house hold chores. Women should be knowledgeable of medicine and cures family illness, if not knowledgeable, they seek for a wise woman. Wealthy can afford doctors. Rich women supervise servants.

Men could own farms, markets, to be an actor, soldiers, leathering etc... it is rare for men to be present during childbirth. most of the time men helps the women

*Dress code
Clothes display on how wealthy a person was. the richer ones can afford expensive clothing with good quality of materials such as silk, linen, wool, and most of the time decorated with jewels and gold thread.

Poor wore simple cloths, loose fitting made from woolen cloth. Men wore trousers made from wool and tunic. women wears wool that went down to the ground, ofter wear aprons and bonnet.

Tudor Inns were built to only serve ale and food and to provide rooms fro travelers. The inns were often black and white half timbered style of the architecture of the 15th and 16th century houses.

These are some Images I've gathered on how a 15th century Inn would look like and most of the images are based on the Old Crown Inn in Digbeth. I have included some illustrations of some buildings to get a feel of the art during those times. 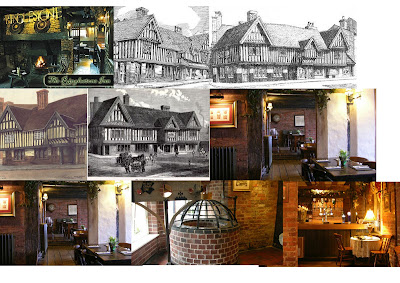 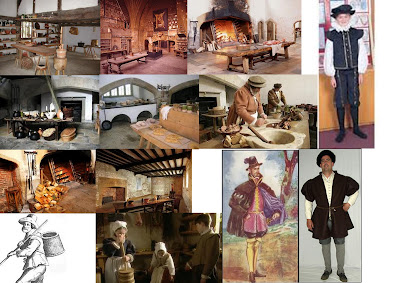