The start of my second year of Animation, we will be working in groups and also collaborate with the Architecture student. The aim of the project is to create an animation promoting on what Digbeth represents capturing the expression of Digbeth’s community showing its sense of place.


To promote Digbeth, we must overcome its negative image and make it encouraging and inspiring to people and could also show history behind it. Digbeth had a historic connections to the industrial revolution's iron and steel foundries to this present day of creative arts. Digbeth was the birth place of  some of the iconic brands such as Typhoo Tea and Bird's Custard and now transformed to the Custard Factory. Now these days, Digbeth has attracted  artists and graphic designers because of its grungy street art, this has also attracted Channel 5's 'Gadget Show'.


In order for me and my group to truly understand Digbeth, we gathered reference pictures and have a feel of the surroundings and analyse what comes in mind why people dont like the area and why they like it.

These are some Reference Photos that I've gathered: 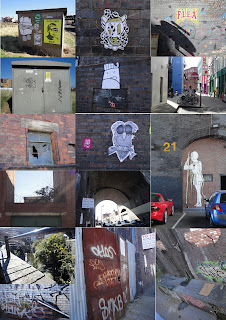 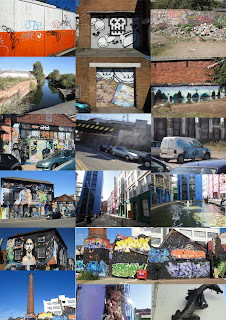 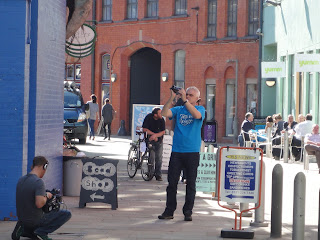 Our group's Initial idea for the animation is to use pixellation to a person walking and interacting with the animated graffiti coming to life on Digbeth's walls. The beginning would start off by showing a bit of history in a complete gray scale with graffiti tags, then gradually the graffiti evolves to a more creative colourful form till the end showing the unique beauty of Digbeth. 'Beautiful in its own way'

To produce the animation of our initial idea is to use the green screen filming the person walking then layering it on top of the 2nd video panning a series of long brick walls in the district. A 3rd layer will be an animated 2d graffiti which would be the striking visuals of the final production, this will be done by flash, or toon boom. All these layers would be all composite in Adobe After Effects. As for the sounds, we can collaborate with some music students and add some interview comments about Digbeth to it.


I have created a simple example on how the general animation would look like using Adobe Photoshop. 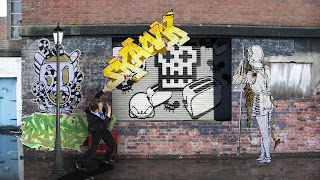 Me and the Group visited Digbeth to gather research photos and videos, It was really hard to find a single street with walls connecting to each other that would have given us few minutes of walking along side a wall. If we was to film a long street, the cars parked by are a distraction to our work which would be hard for us to capture the buildings and animate.