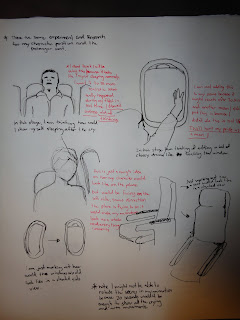 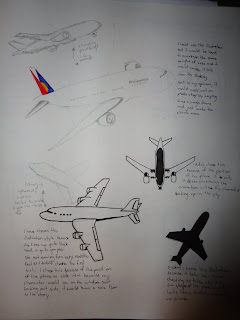 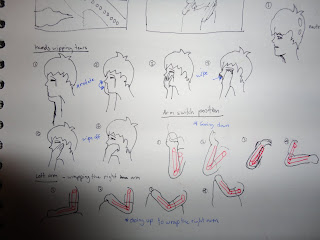 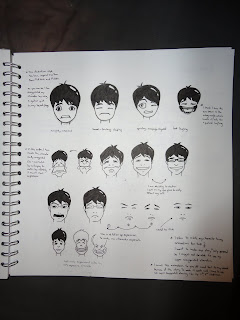 I have started this animation on the day we were given the task. I was very excited to make it and finish it with the best of my ability showing a short clip of my life. I did some research, planning and tests on how my character, plane and objects would look like by looking at some images and video in the internet and looking at my self in the mirror. I have done my anticipation test on my RVJ how will the arm move. when recording it, I have made every movement slower so it will suit well with the sad moment. I didnt show much exaggeration in making my character because I'm not into that sort of style, and I want this animation to really relate to me, but I have done tests in my RVJ about exaggerated drawing of myself. As for morphing, I have done that to the clouds changing shape into I Love NYC to show what I was thinking during that moment.

When Im satisfied about my planning and development I started making my frames and took pictures of it on istopmotion. I have then developed them further to make my animation much more interesting and touching for my audience
This is my first test of my 20 second animation project. I have done this animation by taking a snapshot of every frames I drew. I have noticed that the character and the objects doesn't shake a lot and works quite well. It has good use of timing and spacing like pausing when he was looking at the window suggesting that he is thinking of someone or place that he miss

In this 2nd video, I have tested on adding some close up effects to really show my characters emotions. I want the audience to be touched by the simple short story of my animation.

In this 3rd test, I have done this by using photoshop. I have scanned every frames I drew and layered them on top of each other then erasing the seat and window from my character. I kept 1 single frame of the seat and window and used it throughout the scene where my character cries. I have also added a new frame for the last scene where the clouds morphs into I love NYC

As you can see, I didnt add any close ups because I have noticed that its losing quality when I export it to a video

This is my Final version. I have decided to add a song clip of 'The Scientists' by Coldplay. I have chosen to add this song because I was really listening to it at that moment in real time. I have extended the I love NYC so the audience can have more time to read it
>

I have based my airplane animation from this video looking like it just take off, flying upwards

I have used this video as another reference on what position the passenger can see outside the window.